Today we did not get lost, since I had downloaded an app of an offline map of Belo Horizonte. When we were losing our direction it was easy to find our location in the map. Does this make our trip more or less interesting? What are we losing with our ability to always locate ourselves?

“Av. Contorno” is not easy to navigate. In this area, it takes shape as a wide ditch with many lanes on each side and many overpasses, some for car traffic and others for pedestrians. The pedestrian overpasses remind me of the “Circunvalación Américo Vespucio” in Santiago. I can’t help but feel sad and think about the exhausting experience [perhaps frightening at times] of those who must rely on them on a daily basis. One of the overpasses seemed to extend deeply into the “outer city,” outside of the “Contorno.” It makes me mad to see such awful solutions in an attempt to solve connectivity issues in cities, where car flows prevail over pedestrians.

One of the fantastic aspects of navigating a foreign city is that small details became profoundly interesting and visually captivating. I am sure that either in New York City or Santiago, my hometown, such small details – broken windows, graffiti, disposed objects, garbage bags, etc. – would not grab my attention. Having the time and awareness allows us to detect the everyday hidden objects, actions, and practices in a city. A series of broken windows on the façade of a huge modernist concrete building [perhaps a police station] made me think of Gordon Matta-Clark’s work at Documenta, when he was expelled of the event for breaking the windows of the buildings hosting the exhibition (Window Blowout, 1976). 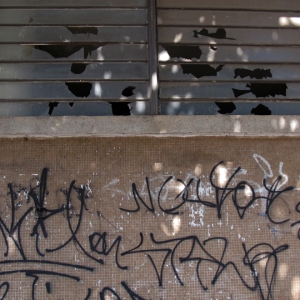 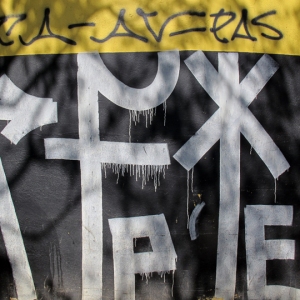 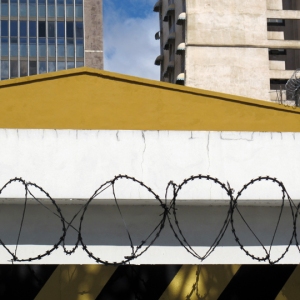 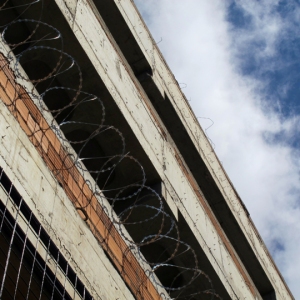 Again, barbwire [some kind of barbwire but a lot more sturdy and aggressive] covers many walls separating aggressively the public from the private domains. I took a photo of a stencil reading: “CUIDADO CÃO BRAVO” and a guard approached me to ask what we were doing – “Somos artistas” – “We’re artists,” I replied. “Vem de fora?” – “Are you from abroad?” – he asked. “Si, somos Chilenas” – “We are Chileans.” It’s all good, he replied with a gesture and went back to his job, which consisted in holding a sign “parking available” by the side of the highway.

I urgently needed to urinate and saw myself in the middle of this desolated landscape of highways and overpasses, but luckily we walked by an in-door market. Since I have seen many public “sanitarios” – toilets – in other public spaces, I asked the guard if there were bathrooms inside. He kindly gave us directions. The market was more like a bazaar, a labyrinth of small alleyways and small stores selling diverse objects: electronics, cell phones, jewelry, clothes, etc. There were quite a few Chinese vendors in some of the stores. There were many people walking along the narrow alleyways of the market, which made navigating the space very confusing and a bit overwhelming. Still, we were fascinated by the excess of colors, sounds, and bodies mixing in such a lively and diverse space of exchange.

Back in the street again, many homeless people were sleeping on sidewalks and small parks, taking over in-between spaces, among the flow of pedestrians. I can’t help to look at their feet, covered with dirt. These feet have dirty, deformed nails and a thick skin with calluses product of days of walking on the street. A man had thick dreadlocks that have not seen a drop of water in years. There are no images of these street characters, since taking pictures of these dispossessed bodies feels like a disrespectful act. I did take photos of some traces of the lives of homeless people in the street, such as pieces of clothing and a bag of bread stored on a windowsill. These traces remind me of Francisca Benítez’ video Garde l’Est (2006), which documents the possessions of illegal immigrants and refugees, kept on tree branches near the Parisian train station: http://franciscabenitez.org/works/garde-lest/

Inequalities can be “disclosed” (Hekman 2010; see previous post) by focusing on small, invisible details of the landscape, as well as invisible actions taking place in public spaces. While walking the “Contorno,” we crossed a triangle-shaped park taken over by a group of homeless. Mattresses and blankets were the only objects accompanying them. We commented about the living conditions of people living in the streets of Belo Horizonte, and how despite all the striking misery, being homeless here might be less tough than being homeless in New York City; it is winter now and it is still about 25º C; at least, homeless people don’t die frozen in the street. What a miserable consolation. 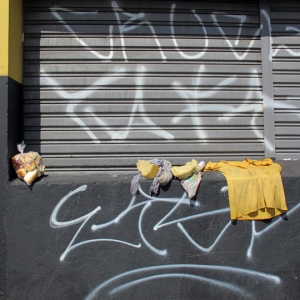 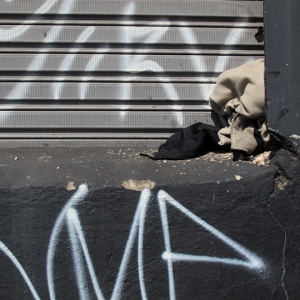 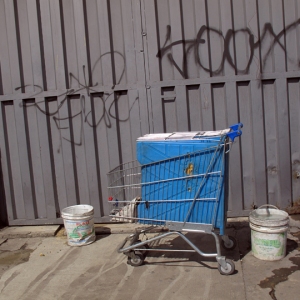 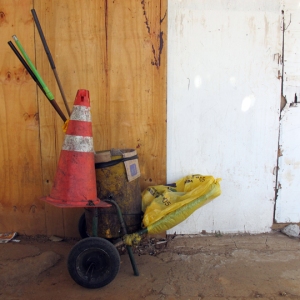 Contradictions are constantly evident here, as in every Latin-American city. It was only last night when we walked through an opulent neighborhood, with fancy art galleries and shops. Today, public spaces are taken over by street vendors and the homeless. Informal economies bring life and movement to the street; they represent the creative will of individuals to make a living in a society that constantly excludes them.

After walking by the “rodoviário” – bus terminal – we went back towards the inner city. Highways coming from all directions intersect above ground in this sector, some of them introducing vehicle traffic into the city center. These elevated roads create shaded areas where vendors and pedestrians gather, as well as informal, makeshift kiosks displaying all kinds of products. A group of men were holding rollers, which were used to clean car windows in exchange for tips. This is also a common practice in Santiago; everywhere in the city you may find men and boys [but I cannot recall seeing any women] offering this service near important intersections. They started posing for the camera, making signs of “it’s all good” – with a “thumbs up!” gesture. So far, people in Belo Horizonte seem less weary of cameras and social exchanges. Instead of asking for money, they stand in front of the camera, ready to be immortalized. Social exchanges and relationships among bodies take shape somehow differently than in exchanges I have experienced in NYC and Santiago, but I am aware that it is challenging to articulate these differences without falling into misleading generalizations.

Most of the concrete, art-deco type of buildings in this area is covered by graffiti. Looking up is always a visual experience. Working with the square format allows me to create compositions by playing with angles, directions, and lines within a frame. The contrast between the deep blue sky and the gray of concrete buildings covered by the tags or “pixes,” as well as “pichaçãos,” the messages they contain, together contribute to create an assemblage of visually appealing texts. Before heading back to the center, we crossed a park with a weird statue, a space full of homeless people and pedestrians everywhere. People eating, selling, walking by, sleeping, asking for money, etc. were taking over the street. 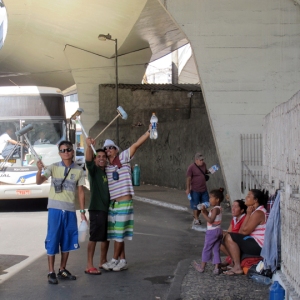 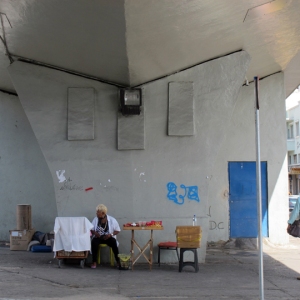 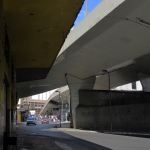 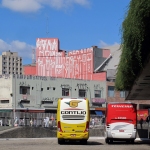 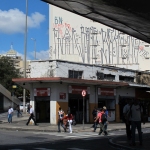