Today, we finally reached the “Contorno,” after yesterday’s failed attempt. We had tried to reach the highway by walking across the city center and got distracted along the way. At “Praça 7,” a group of girls were offering professional photographic services among the huge flow of pedestrians. All of them had fluorescent t-shirts advertising the photo studio. Tamara started a conversation and the girls were so nice and chatty, we ended up getting stuck for a while. There was also a tetraplegic man who claimed to have become handicapped after drinking Coca-Cola with traces of rat poison. He had a microphone attached to his body was sitting in front of a big billboard with information about his case and several newspaper clippings. A younger man was distributing fliers in exchange for a coin. We later got distracted in several markets; Tamara bought a shirt and I got a sparkling blue wedding dress, which I intend to wear at my friends Mary and Hashem’s wedding next fall. Such amazing things you can find while doing fieldwork in Belo Horizonte! I had noticed many stores selling glamorous party dresses; there has to be a widespread tradition of dressing formal for certain kinds of events. The dress was not very expensive, considering the high cost of life here in Brazil.  After our shopping adventures, we needed to find a place to eat, and by the time we reached the “Contorno,” we were already exhausted. I was in a lot of pain by then – a gift from the MTA, and asked Tamara to go back to the studio and postpone our fieldwork until today.

Without any shopping errands along the way, it was pretty fast to reach our destination, walking directly along “Rua Tamois” from Alfonso Pena to the west end of the city center. Upon arrival, there were signs of homeless people sleeping on the pavement triangle – I can’t really call it a park – and underneath the overpasses. Not many people were on the street at this time, but their belongings were piled up and organized in different areas. We walked by a middle-aged man, who was smoking as he laid on a mattress, covered by a thick blanket. Several shopping carts kept people’s belongings. It is always painful to see so many people living on the street, an expression of the prevailing inequalities of Latin America.  I wondered if the Brazilian government helps out the homeless in any way. Are there any shelters for the homeless in Belo Horizonte? Does the city distribute food? Are there any private institutions, religious organizations or NGO’s helping the poor? How can we talk to people living on the street if we don’t even speak Portuguese? While traveling Belo Horizonte, we usually get by speaking Spanish, and I introduce the few words I have learned of Portuguese. Sometimes I can throw a few key words – “morar” (to live), “rua” (street), “ficar” (to stay), etc. and people seem to understand; but it’s impossible to know for sure if they do. We will find out more about what they have understood and what their responses are once we transcribe and translate some of these conversations. 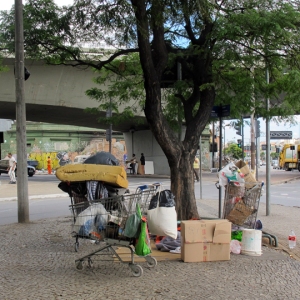 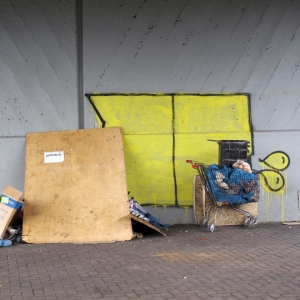 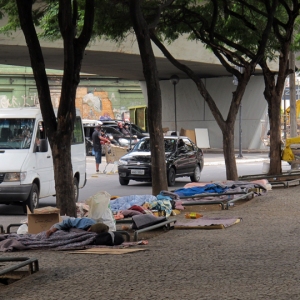 Soon after reaching the recycling area, Marcos showed up. He seemed to remember our last visit: “as meninas Chilenas!” We followed him to the first of warehouse, and a young, red-haired woman came to join us. She asked what we were doing and started telling us life stories. Both of them live in the street and make a living by recycling found cardboard, bottles, plastic and metal cans. She told us there are good and bad sides to being homeless, that she has a kid, who does not live with her. She displayed her medical records to proof she was healthy. I asked them if they help each other. For what I was able to understand, they do help each other by sharing food and giving each other blankets and clothes. This conversation went on for a long time; they discussed their life on the street, their problems with the police, how recycling works and how they are able to make a living out of others’ disposed materials. A girl who joined us later told us that she has never been outside of Brazil and that she would love to see Paris and Italy.

Later, a very thin, dark-skinned young girl joined our conversation; she was carrying a baby wrapped in a pink blanket. She had a bruised eye and was shivering because of the cold – that’s what she told us. She asked us to buy diapers for her baby. I could not understand what she was saying and finally Tamara understood what she was asking for, but it took us a long time. It was unexpected, since no one else has asked us for anything around here. Usually, I don’t give money to beggars; I always remember my dad’s claim that giving people money only calms our conscience but does nothing to solve structural inequalities. But this time, she was only asking for diapers, not money, and the little girl was very sweet. We ended up walking to a pharmacy nearby and buying a bag of diapers, which cost 20 reais – about 9 US dollars – and which, according to the mom, would last for 2 weeks.

There was an atmosphere of familiarity among them. The mom walked into one of the warehouses to get a cigarette and left her daughter with Marcus, who was very sweet to the baby. Marcus has two kids, who live somewhere else. Later, the red-haired girl walked out of one of the warehouses with her lunch, and asked if we wanted to eat some of her food. She was eating meat with potatoes and pumpkin from an aluminum container. They continued passing the baby along; even I ended up holding the baby while walking to the pharmacy. The girl did not complain at all; she seemed to be accustomed to be part of a commune. We asked Marcus if it was possible to check out the recycling warehouse. He told us to wait while he made some inquiries. He came back and brought us to the second warehouse and explained the guard what we were intending to do, to what he kindly responded: “NO, it’s not possible. Tudo bom?” – He said smiling after rejecting us sweetly. – “Si, todo bom!”

We went back to say good-bye to our acquaintances and continued walking along the “contorno.” The entire block seemed to be taken over by recycling material. There was a lot of movement on the street, people coming in and out of the warehouse with their carts. There were several “carinhos” parked on the sidewalk, as well as piles of garbage, plastic bags containing material to be recycled, and piles of cardboard everywhere. 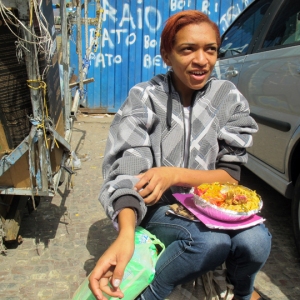 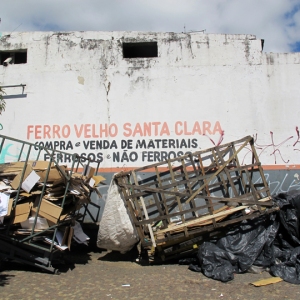 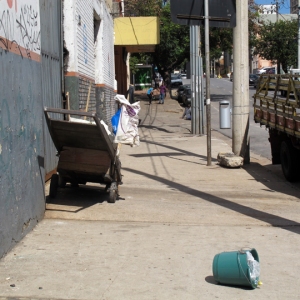 After crossing “Rua Ouro Preto,” the landscape changes dramatically. Here, we saw fewer signs of the recycling business and instead, several car repair shops and other businesses of similar trade showed up on the street. There was a huge store selling safety equipment of all sorts, a parking lot, and a luncheonette. The street became a lot less animated. We passed by a big hospital building, “Hospital Socor,” and a strange lot with huge concrete columns. We did not know what it was, perhaps an electric plant of some sort?

This area seemed to be more eclectic in terms of architecture and uses. There was an indoor rink with skateboarding ramps; a party supplies store, and several car-related shops. Behind a gas station, I spotted a couple of “Motels.” I hint these businesses are similar to the by-the-hour motels you find in Santiago. Despite the slow traffic of pedestrians and the desolate character of this part of the street, public space seemed to be well taken care of.  There were wide planters with flowers separating the highway from the sidewalk and nicely painted garbage containers along the way.   Soon, we reached a pedestrian overpass that seemed very long and busy; lots of people crossing both ways and even a couple of street vendors located on the overpass with their carts. Near the landing of the overpass, there was a huge line of young men waiting for something. We walked towards the beginning of the line, which extended for about half a block, and there was a sign indicating some king of military facility.

We sat down on one of the benches by a young woman wearing bright pink lipstick. She saw us looking at our map and asked if we were lost. We asked her for directions back to the city center, and signaled the municipal park near our apartment. She told us it was too far to walk – “muito longe!” – and instead we should take the train [an above-ground subway] to go back to the city center. What a great idea since were feeling very tired and hungry. After crossing the long overpass, we jumped on a train and soon after made it to “Bem Natural,” our favorite place to eat in the city, feeling lucky and grateful for that last accidental encounter. 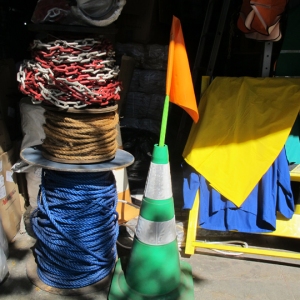 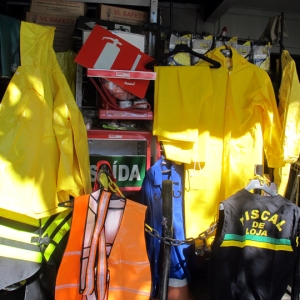 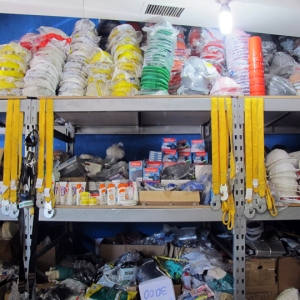 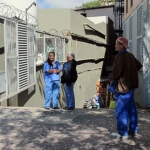 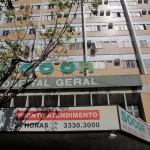 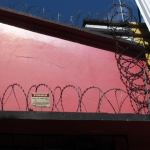 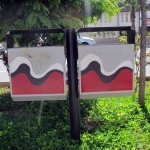 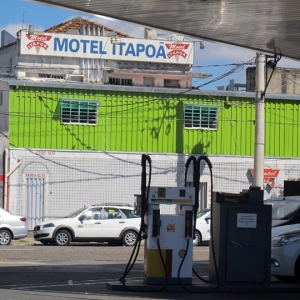