* Whose brilliant idea was to walk the damn contorno?

After some morning errands, we left the apartment about 2:00 pm and headed out to the train station. Taking the train, as opposed to walking to find the “Contorno,” would allow us to maximize our energy to spend more time walking our field site.  We walked part of the overpass to reach the south side of the highway. Here, sidewalks are very wide – about 30 ft. – and have concrete planters with bushes and pink flowers, located in-between pedestrians and car traffic. Buildings here are mostly industrial or storage spaces, such as warehouses, auto sales businesses, car repair shops, furniture showrooms, and parking lots. Like in other parts of the city, most facades are covered with electrified fences and display signs of security systems. Colorful graffiti give life to some of the hermetic walls and facades. As the highway rises above ground, we became enclosed in-between the buildings and the “viaduto” – bridge. 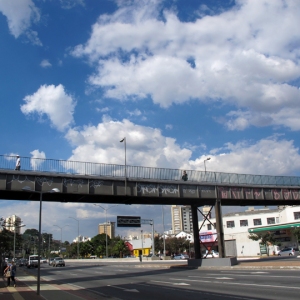 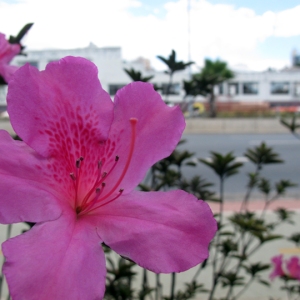 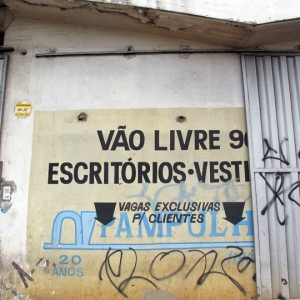 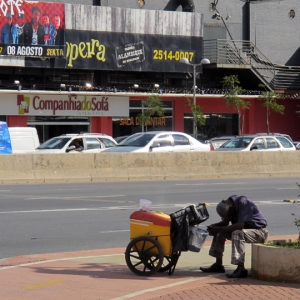 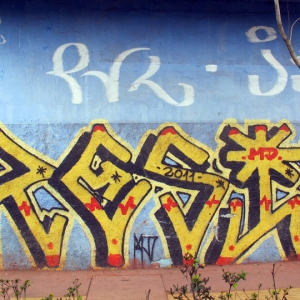 Here, the node of highways, overpasses, river, and train line give rise to an extended and chaotic landscape. Despite the messiness and alienation I felt among such massive infrastructures, this place was somehow aesthetically appealing. Tamara got stuck taking lots of photos, which made me think that only crazy artists find beauty in these chaotic, void, and ambiguous spaces.

After checking with the Belo Horizonte map in my phone, I realized we had lost the inner highway way back, as soon as we got off the train station, and were heading towards the outside of the city. Tamara said she was happy we got lost, since we accidentally had found this “beautiful place.”   Anyone else in her right mind would consider this site a real shithole, I thought. But paradoxically, I was also seduced by this weird place, especially by some of the graffiti – a stencil of a sunbathing girl and a tag that read “vandalismo é robarle a o povo” – “vandalism is to steal from the working class,” as well as the patterns of cables and the shades that traffic signs and posts left on concrete walls. But walking through this area felt extenuating; “who was the crazy person who had the brilliant idea to walk this damn thing?” – I joked. Afterwards, we proceeded to walk back to find the lost “Contorno,” passing-by some car showrooms and a huge furniture store. 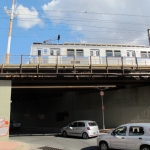 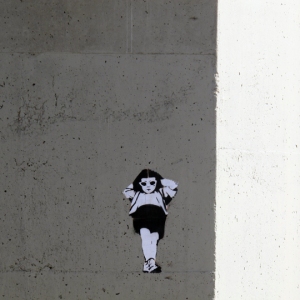 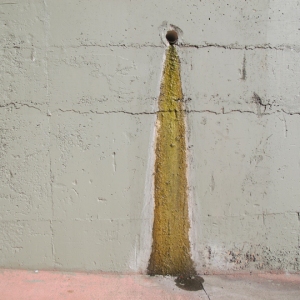 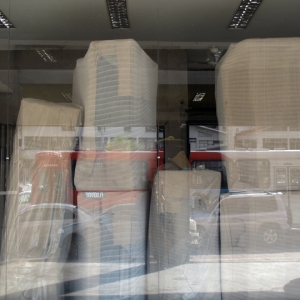 By the time we found the inner loop, I was feeling thirsty and tired; all I could think of was a cold beer. I set up the goal of finding a bar, not so easy in the middle of this mix-use, hybrid neighborhood. A few blocks ahead, we walked by a bar, which seemed to be closed. I could almost taste a cold beer at the other side of the gate! I asked an old man if the bar/restaurant was open. And it was! We were the only clients, and sat down by a red, plastic table in a corner, surrounded by lots of plants. The old man, who seemed to be the owner, brought us a beer bottle in a thermos. This is a common practice in Brazil, to avoid beer getting warm. Instead of buying individual bottles or cans, you usually buy a larger bottle and drink from small glasses.

There were a couple of young guys serving the tables – later a few more people sat down at the bar – and attending the barbecue, a 5-ft long grill where different kinds of brochettes – pork, beef, sausage, and chicken covered with beacon – were being grilled. A middle-aged woman – perhaps the owner as well – was taking care of the meat. Despite not being a huge meat fan, I ordered a couple of brochettes, since I was starving by that time. The kid asked me if I wanted the meat to be well done or “a punto” – medium rare, and I chose the second option. According to Chilean standards, the meat was totally overcooked and had lots of salt and spices. I have noticed that usually food is very salty around here. The brochettes were accompanied by “farofa,” a typical food made out of corn, which has the crunchiness of breadcrumbs but has more taste – it’s usually prepared with spices and sometimes bacon. I did not know what to do with this; Tamara liked it and was eating it by itself, but I later saw a kid covering his beef brochette with it. 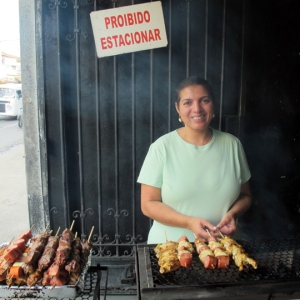 After a couple of beers, we continued our walk. The “Contorno” had changed rapidly and had turned into a fancier area. We passed by “Hospital Felicio Rocho,” an art deco building, and a huge hospital under construction. We also walked by a big and strikingly ugly hotel, “Hotel Contorno.” There is a lot of construction going on in this area. When crossing smaller streets or alleyways, it was possible to get a glimpse of the periphery of the city surrounded by hills. We passed by a huge, modernist-style building hosting a school, and residential houses of many different styles. We passed by another bar with a sidewalk café, but we refrained ourselves to sit down again in order to get at least another section of the “Contorno” done. Finally, we reached “Rua Amazonas,” which marked our goal for the day. Luckily, there was a bar at the intersection. The bar was not glamorous at all, neither was its toilet, but the owner was very nice and did not want us to leave. But we were on a mission and moved on, walking across the city center, all the way to Maleta, a building filled with many bars – for our last beer and some food. We had been walking for over 4 hours and my feet and legs were about to explode. This was undoubtedly the hardest workday, and the least appealing section of the “Contorno” so far. It would not have been possible without a few stops at a bar and some cold beer along the way. 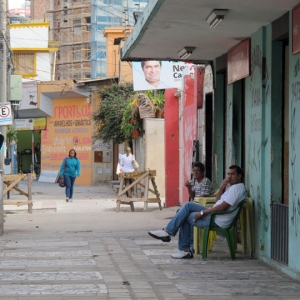 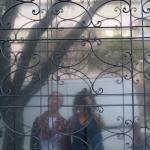