It was quite a struggle getting up and out today after a very fun but late night. (Exposição “ÁREA DE” de C. L. Salvaro Opening and Arcangelo Cafe.) After a shower, some strong coffee and mini pão de queijo, we made our way back to the Contorno by bus. Both Pilar and I didn’t have much energy or inspiration but our time here is winding down and we need to stay on course.

Getting off the bus, I start to recognize the area from our workshops with Maria Elena. Before even reaching the Contorno we encountered a calçada pattern that I wanted to photograph, and on the wall right beside it was another graffiti torso. I stood photographing for a few minutes as a delivery man left the shop and packed up his motorbike. 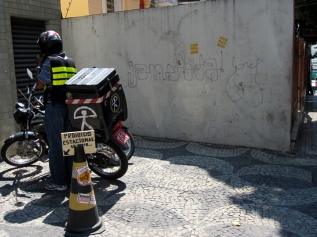 On the corner approaching the Contorno, there was another torso (much smaller than the others we’ve seen) on the side of a small structure that reminded me of the taxi comfort station near the car wash. The graffiti on other side of the building was much more simple, two drawings of crosses. 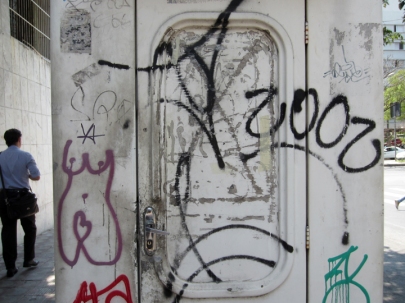 From there along the Contorno we notice many funeral homes, really quite a number of them. There’s a lot under construction that I find very interesting, perhaps it’s the combination of the patterns created by the tree shadows with the construction materials, and the open space creating a contrast with the other buildings in the distance. I linger for quite a while here with this fence. Perhaps I also need a bit of emotional space. 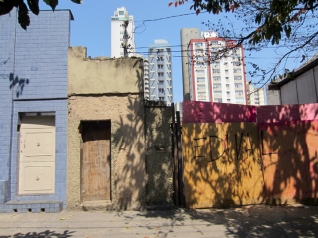 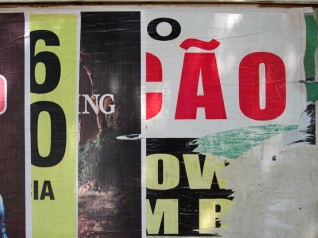 On the corner of this street there’s a house converted into a store with an assortment of ladders of all shapes and sizes placed in the windows and lined up in front of the building. On the opposite corner, across the street, is the restaurant where we ate with Maria Elena and the workshop participants. It’s quite a lovely place and Pilar and I decide to stop there and have a drink and sit at one of the tables outside. 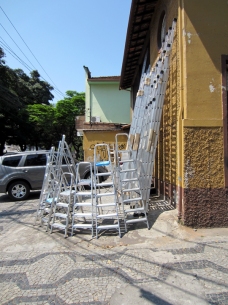 We continue down the street, and I notice a building completely covered in glass that almost seems camouflaged with the sky. It’s very hot today and the especially bright sunlight makes it quite difficult to take in the surroundings and I find myself squinting and trying to create a visor with my hands to see what’s around me. I see a patch of green and shade across the street and head over there to a restaurant/catering hall with an assortment of plants growing on the outside of it. It’s a nice respite. There’s a home goods store and parking garages with funny surveillance signage saying smile you’re on camera. 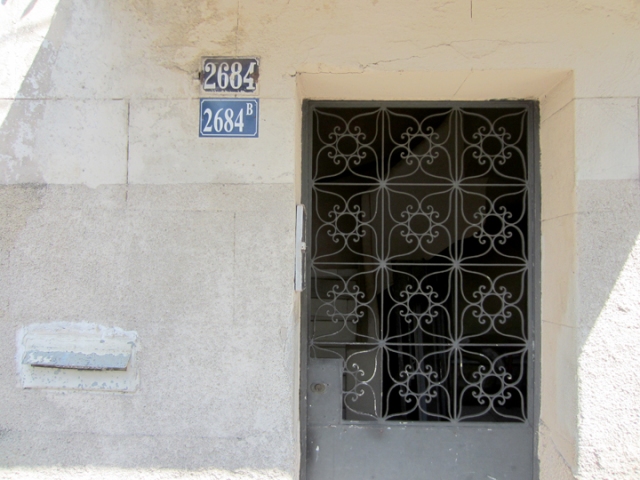 Many of the buildings in this area begin to look familiar (the two tall empty towers, and the circular grey building) and we recognize Av dos Andradas, the street with the river in the middle, that we followed on our first excursion when we walked right past Av do Contorno. It’s rather funny to begin to recognize landmarks and collect memories of being in particular places, when initially everything felt so new and unfamiliar. 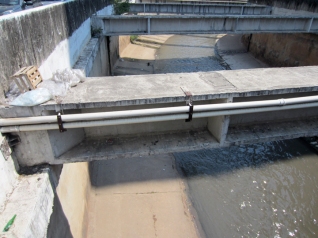 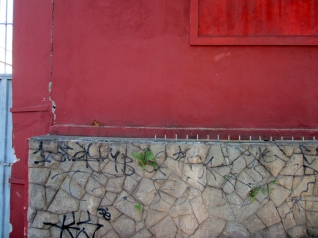 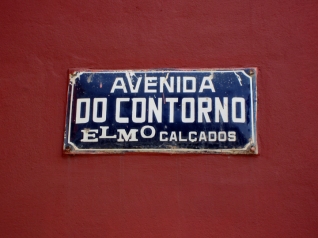 I hear a tapping noise and then see a little boy squatting of the sidewalk knocking a rock against the calçada rhythmically. Contorno goes uphill at this part and passes over some railroad tracks with a wide open view of the city. There are some houses that are built into the wall. I gravitate to this area, spending time photographing and playing with the sharp contrast of light and dark. 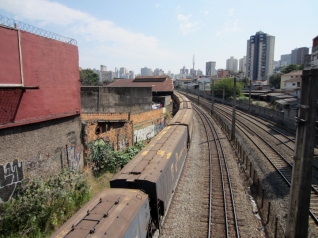 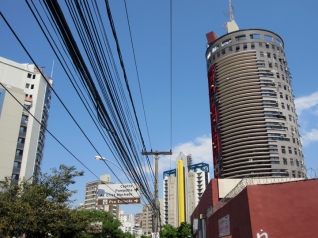 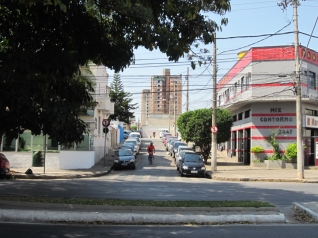 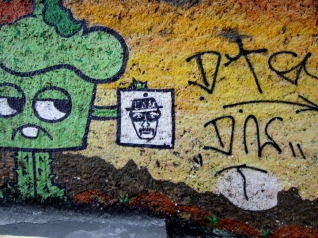 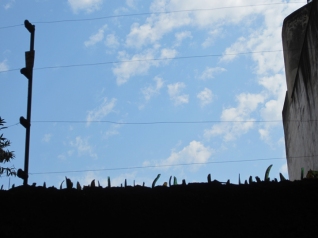 There are a number of houses across the street that also grab my attention, and the silhouette of a woman waiting for the bus. I generally try to frame people and cars out of the picture and today I found myself intentionally including people within the space. Paco Picalli, a business essentially used stripes in the same way that the pixação artists did on the stripes of the parking garage. I notice the way people use their surrounding to hang and store their belongings, as well as the overlapping patterns of ironwork that starts to create a visual chaos. Walking up to meet Pilar, there are a number of men on the street washing cars, but I’m too tired to engage or photograph any more at this point and we decide to head back home. 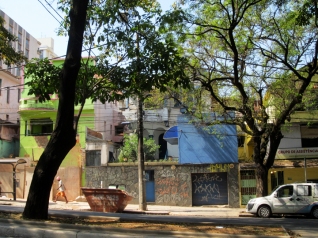 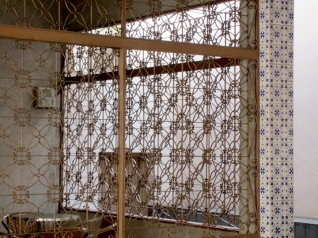 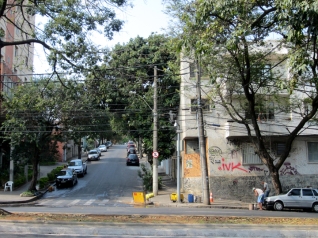